[Study] The Most Dangerous Intersections in Chicago

On November 19, 2019, an unlicensed and uninsured driver failed to slow down at the intersection of 69th Street and Stony Island Avenue in Chicago, hitting and killing a bicyclist.

On January 23, 2020, four people were killed in a crash involving a school bus, taxi, and a pickup truck at the intersection of Stony Island Avenue, 79th Street, and South Chicago Avenue. The pickup driver ran a red light, first hit the taxi driver and then the bus driver, who was at the intersection.

Given this sharp increase in deaths, are there areas of the city where motorists and other road users at an increased risk of injury or death?

Where Are the Most Dangerous Areas in Chicago?

*The map above is interactive and shows every intersection-related crash in Chicago from 2018 – 2020.  Hover over the bubbles to reveal more information about each specific intersection.  If using a mobile device, rotate for the best experience.

The Most Dangerous Intersections

While it’s clear that intersections, in general, pose an elevated risk of injury or death, which ones are the most dangerous?  We created a collision risk index (CRI) that weighs collision volume along with injury severity to find out.

This intersection has gained a reputation of being a “nightmare” and part of a “high crash corridor” for many road users. Busy doesn’t even begin to describe the intersection, which consists of overlapping traffic flows, limited space, and three bus routes. In the past, it has been named the most dangerous intersection due to its lack of protected bike lanes and complex structure that contribute to its safety risks for pedestrians, cyclists, and drivers.

The 15 most dangerous intersections in Chicago:

After identifying problem intersections, we looked for other areas where increased collision risk may be present.  Through our analysis, we determined the most “crash-prone” neighborhoods in Chicago by measuring the number of car crashes per mile per year. During 2018-2020, crashes were highly concentrated in the downtown area of Chicago.

Magnificent Mile was the most dangerous or “crash-prone” neighborhood with the most crashes per mile of road (156), followed by Grant Park (84), and Loop (62). Loop had fewer crashes than Grant Park and Magnificent Mile, but the most fatalities (11). 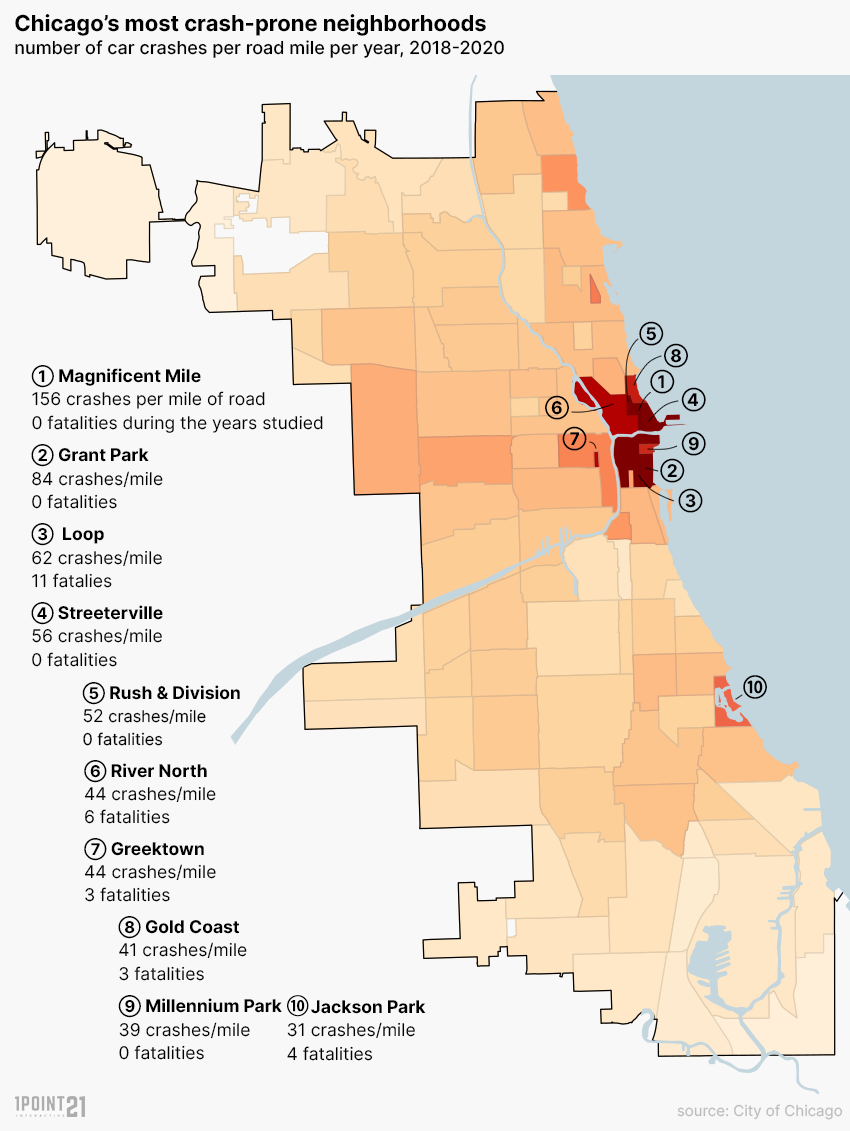 The 10 most crash-prone neighborhoods in Chicago:

Who Is Most Involved in Car Crashes?

In general, men are much more likely to be driving than women in Chicago car crashes – younger men in particular.  In fact,  male drivers aged 25-29 were involved in 93 percent more collisions than expected based on the number of registered drivers in that demographic.  By this metric, older male and female drivers are – by far- the least likely be involved in a crash. 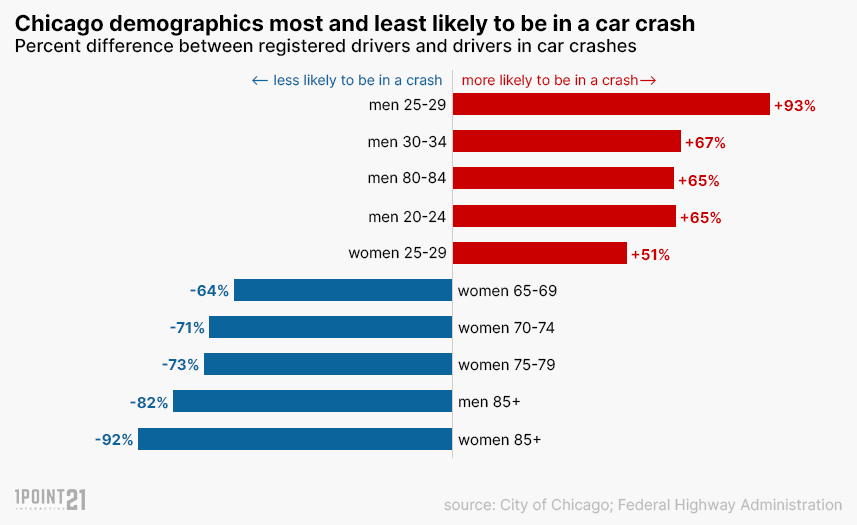 What Are the Main Causes of Chicago Car Crashes?

The three most common causes of motor vehicle collision were drivers failing to yield the right-of-way (22 percent), following too closely or tailgating (19 percent), and failing to reduce speed to avoid the crash (15 percent).  In fact, more than half of all crashes were attributed to one of these three behaviors. 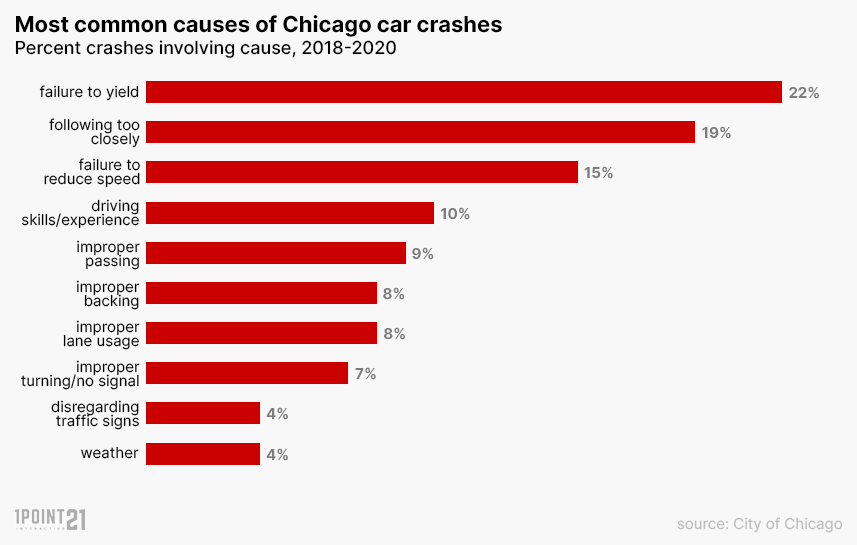 Inexperienced drivers (ten percent) and improper passing (nine percent) round out the top five. Interestingly, only four percent of crashes were attributed to disregard for traffic signals.

While failing to yield the right-of-way caused the most total crashes in Chicago (42,583), it was the second leading cause of traffic deaths (42). As you might expect, more people died when a driver failed to reduce speed (51) than any other factor.

However, the top crash factors are different in different areas of Chicago.  We examined the most common crash factor by census tract.  Failure to yield and following to closely are number one in most areas, but it was interesting to see that improper backing and inexperienced drivers were the top cause in several census tract areas. 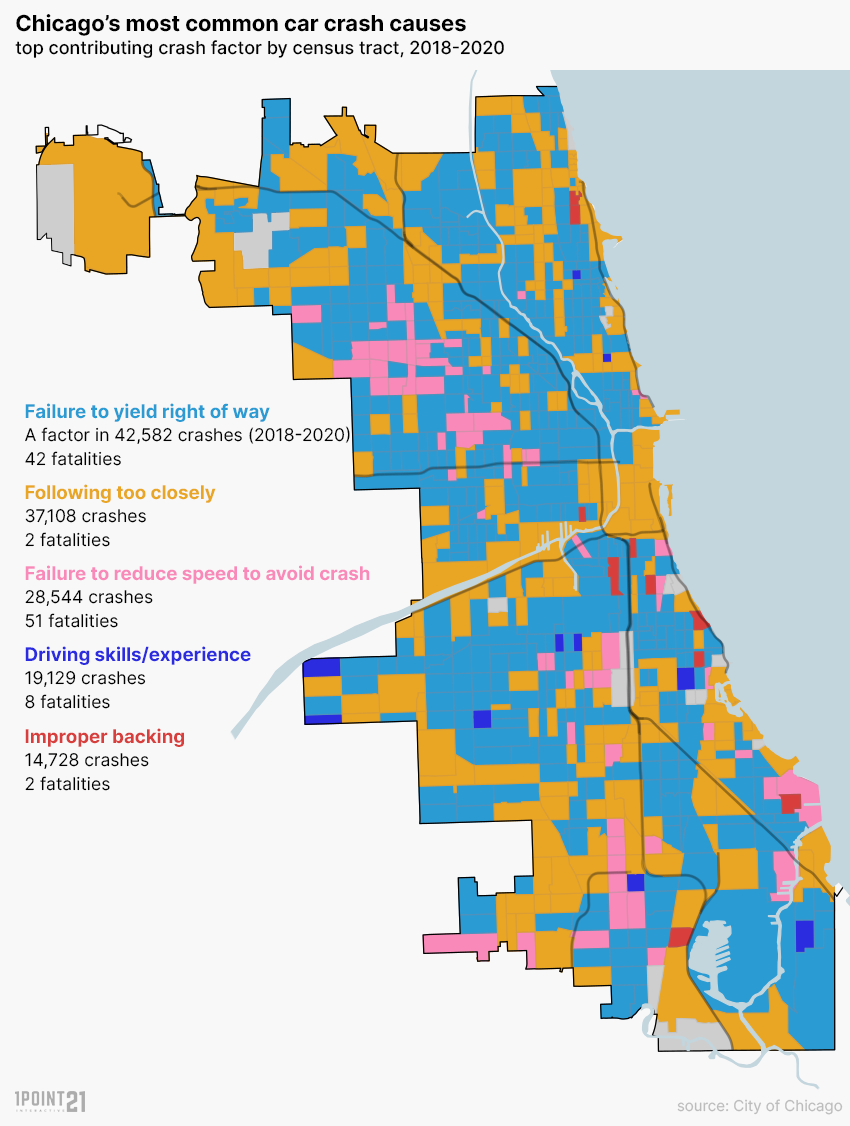 There are plans for redesigning the intersection at S 79th Street and S Stony Island, as well as hopes to receive federal funding to prioritize traffic safety for all road users. However, it is important for citizens to take safety into their own hands.  Remember to take extra precautions while driving, riding, or walking on any roadway (but especially near well-known dangerous intersections of Chicago).

This study is based on crash data from the city of Chicago from 2018-2020 – the most complete and recent data available. Registered driver data was sourced from the Federal Highway Admin. and reflects data from 2019.

If you would like to report or republish our findings, please link to this page to provide a citation for our work.